Recently, D Magazine's Peter Simek wrote an intriguing piece about the City of Dallas getting behind a future Rangers Ballpark proposal.

The article suggested proposed sites for such a ballpark,  including Fair Park and Downtown.  Do we really want the Ranger's in Fair Park?  Is that going to bring the Wrigleyville atmosphere that we all crave?  Mention Fair Park to most people and few think about spending their summer nights there.

Another site mentioned is the old Reunion Arena plot.  I went to many games and concerts at the old arena. I recall a facility tucked away in a far corner of downtown with a total lack of any urban atmosphere.  Would that really change with another sports facility?

Of course any site chosen in Dallas County would be perceived as a slight to fans in other parts of DFW.  Especially fans in Tarrant County, who have hosted the Rangers since they moved here in 1972.

What if there was a site that had access from I-30, I-35, Woodall Rogers, Loop 12 and was just a few miles from Central, the Tollway, I-45, not to mention Mockingbird and Inwood?

Say hello to West Dallas.  Better yet, say hello to the corner of Sylvan and Singleton, just a few blocks from the end of Woodall Rogers and the Margaret Hunt Hill Bridge.  There is perhaps no other site in DFW that has better access.  For fans driving from Fort Worth, it's just 15 minutes further west from Globe Life Park on I-30. And unlike Downtown Dallas and Fair Park,  Tarrant Country drivers won't have to navigate through the choke hold that is the I-30 canyon.

You can reach it from I-35 via the Sylvan exit or the Margaret Hunt Hill Bridge exit.  Loop 12 is just 5 miles away on Singleton Avenue.  The Dallas North Tollway ends just two miles from the proposed stadium site.  Central Expressway and I-45 both empty into Woodall Rogers which enters West Dallas via the bridge. 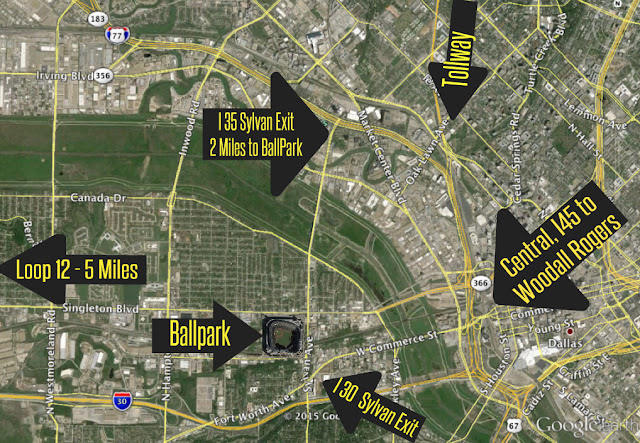 There is even a rail line on the south end of the propose site that could be used for a future commuter rail line.

The area has a number of new gathering spots at Trinity Groves with more planned and Singleton Avenue has recently been widened and is ripe for future development.

The ballpark could even be built with the downtown skyline and the iconic Margaret Hunt Hill Bridge as a dramatic signature outfield backdrop.

One downside, the site is currently an iron works foundry and might be a possible brown site. But other stadiums, specifically San Antonio's Alamodome, have been built on similar sites after a cleanup.

Another potential downside is that it does not have access to the Dart Lines, but a street car line not unlike the new Oak Cliff line might be a possible solution.

But with it's central location, it's access and potential for mass transit, and the number of bars and restaurants proposed for the area, this could be Dallas' best shot at landing a ballpark that becomes a true urban destination.

Mark "Hawkeye" Louis is the longtime host of 'Hawkeye in the Morning' on NEW Country 96.3 KSCS.  He is an avid baseball fan, an outfielder for the amateur Fort Worth Coyotes and a former member of the TCU Baseball Broadcast Crew.