If you travel to Sapporo, Japan, you might be surprised to find a familiar looking replica of a North Texas landmark. The new home of the Japanese professional baseball team, the Nippon Ham Fighters (the team is nicknamed the Fighters and owned by the Nippon Ham Company) is modeled after the Texas Rangers' Globe Life Field.

The owners of the Fighters were so impressed with the Rangers facility,  they consulted the American League team to model their new ES CON Field after the Arlington facility.  They are even building a surrounding "Baseball Village" complete with hotels and restaurants.

- ES CON Field's roof is more notable. While Globe Life Field's retractable roof looks more like the cover of a outdoor grill, ES CON Field has a dramatic pitched roof that looks more like a church. The roof which mimics the roofs of homes in the Hokkaido region of Japan,  can hold up to 14 feet of snow.  Sapporo  is one of the snowiest parts of the world and hosted the 1972 Winter Olympics.

- The facility is being built to host mainly outdoor baseball games, with the roof covering the field on cold days. The field is situated differently, so most fans won't notice the roof behind them on days the stadium is open. Unlike Globe Life Field, the turf at ES CON Field will be natural grass. 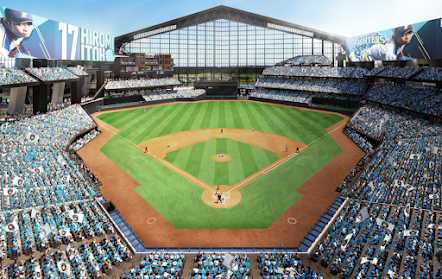 Compares the views from home plate. ES CON Field (atop) is situated so the roof is mainly out of view. That is not the case in Globe Life Field (below) 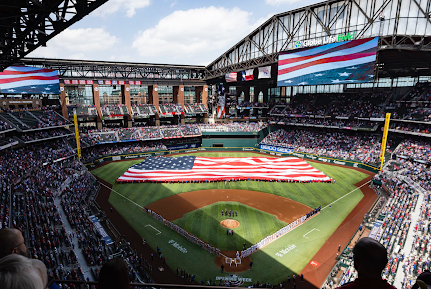