The Day The Davis Cup Came to A Dallas City Park

The year was 1965. Tennis' premier international event, the Davis Cup was scheduled to hold the semifinals in Dallas. Usually an event of this magnitude would be help at a first class arena or a top notch country club. In fact, several local country clubs did offer to host the event

With one important caveat.

Their clubhouse facilities could not be used by Arthur Ashe, the first African-American to be named to the Davis Cup team. The organizers of the event did not see this as a viable request. 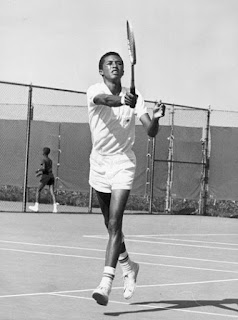 Stepping up to save the day, the city of Dallas. The city had just opened up a 20 court facility in East Dallas at Samuell -Grand Park. The city offered to resurface Courts One and Two into one center court and build temporary stands to accommodate the crowds. On July 31, 1965, a city park in East Dallas, hosted one of the world's premier sporting events.

Samuell - Grand Park Today: When I first moved to East Dallas in 2008, I was excited to find the twenty court facility so close to my home. I stopped by multiple times only to find the pro shop locked and twenty well preserved unaccessable vacant courts. I called the number posted on the door several times but never received a reply.
A few months later, I started to see signs of life, including a  new sign advertised a website. I searched the web to find that the city has allowed the Midcourt Tennis Academy to run the facility.
The city  passed a bond package and a new club house was built and the courts were resurfaced. It's once again the most popular and modern tennis facility in Dallas. If you visit the Samuell Grand Tennis Center,  ask for Court 1. Arthur Ashe once played there.