Note:  I wrote this post a while ago when downtown Fort Worth's TCC River East Campus opened. I am constantly surprised how many people are completely unaware of this place. Most confuse it with the large TCC Campus a few blocks away located in the old Radio Shack Headquarters, itself a striking set of buildings

One reason this architectural gem goes unnoticed is that it is below street level. Although it is a block from the Tarrant County Courthouse, thousands of cars pass it everyday and have no idea it is there. I thought this might be a good time to revisit this beautiful and virtually unknown downtown Fort Worth oasis.

I ask you, how could you put a waterfall in the middle of Fort Worth and have no one notice? 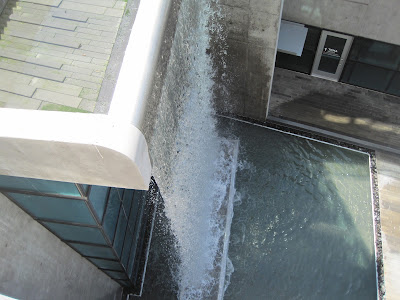 At one point during construction, Tarrant County College decided it would be cheaper to buy the Radio Shack Headquarters rather than continue with a plan that included a bridge over the Trinity River to another part of the campus. Even though the bridge and north campus were scrapped, the architect decided to keep the campus mainly below street level. At one point Ed Bass passionately argued for the design to have more interaction at street level and paid for another architect to offer a redesign.
Bass' idea was rejected and the campus was built mostly below street level, even though the river bridge it was to connect to, was no longer needed.

Like a lot of people who have been following the construction soap opera, I had my doubts about this new campus. Especially when looking from the Tarrant County Courthouse, you can see very little of the facility.

It is a shame that the campus is so hidden from the street, because it really is a gem. Sadly, most people who work in downtown or drive by on Belknap Street will probably never realize the stunning buildings that rest below. 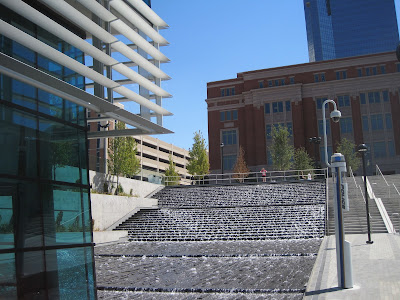 The campus tries to compensate for its subterranean design with an entry plaza on Weatherford Street which includes a waterfall that continues into a stream flowing throughout the campus.

As you walk closer to the Trinity River, you begin to realize just how big these buildings are. Since you see very little from the street level, it's hard to imagine that the campus consists of 5 and 6 story buildings 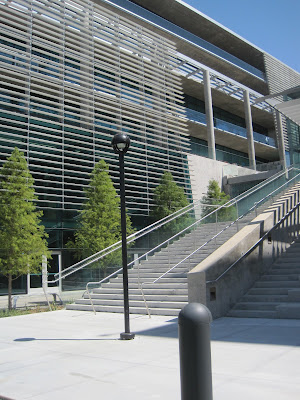 But because of the many levels below the street, the campus needs a variety of staircases, walkways, bridges and elevators that create a Rube Goldberg effect. Lost students wandering around trying to find their classes seem to be a distinct possibility.

That being said, the Trinity River East Campus is quite beautiful and is truly a gem in downtown Fort Worth. It's an urban oasis that links downtown to the Trinity River. Sadly, as Ed Bass warned, the subterranean design insures that most people will never know it's there. 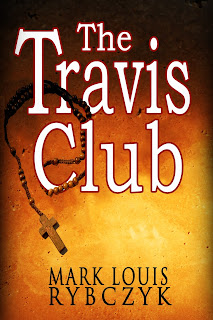