Anybody for a dip in White Rock Lake?

Recently, Fred Lockhart received a $300 ticket for 'wading' in White Rock Lake. Well, that's what was written on the ticket. Actually, he was floating in an inner tube and fishing.

Mr. Lockhart says if he is ticketed, then so should every kayaker and boater who must get a foot wet to push off from White Rock shore. That's a pretty good point.
Here's my question. Why can't we wade in White Rock Lake? Furthermore, why can't we swim in White Rock Lake?
I can already hear a chorus of 'Yuck'. But before you dismiss this as a ridiculous musing, consider a few points.
White Rock Lake was built as a reservoir for the city of Dallas in 1910. Until the late 1950s, the lake was a popular swimming hole. The first art deco building in the Southwest was constructed in 1930 complete with locker rooms, concession stands and a sandy beach to accommodate swimmers. 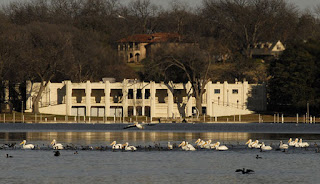 That building still stands today as the Bath House Cultural Center off Buckner. 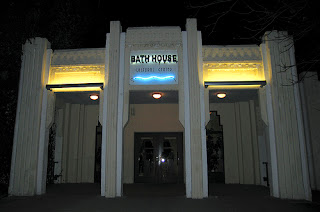 In 1958, the city suffered a drought and needed the lake again as a water supply. Swimming officially ended in September 2, 1958. After 1958, the city of Dallas focused more on building segregated neighborhood swimming pools rather than re-opening the beach.
During the next three decades, the lake slowly fell into disrepair until it became a teenage cruising spot. In the 90's, the city spent $12 million to clean up the lake, including a two year dredging project. Today, few would argue that it wasn't money well spent. White Rock Lake has become a true gem to this city. The neighborhoods surround the lake have seen their home values skyrocket, thus increasing the property tax revenues.
With this in mind, I recently took a trek out to the restored bathhouse. Since the dredging, one could argue that the lake is as clean as Lake Lewisville or Grapevine Lake. Could we once again have a beach in the middle of Dallas? Could White Rock Lake be resurrected as an urban oasis? Could it be as popular as Austin's Barton Springs?
These are questions I pondered as I looked out at the old swimming dock that still floats in the lake. As I contemplated dipping my toe in the water and making a civic statement, I saw a water snake swim by.
Never mind.
at September 14, 2009