Bob "Daddy-O" Wade said it all started for him with one gigantic iguana. If you go by the entrance of the Fort Worth Zoo, you'll see the current resting place of the Iguana. But it more infamously sat atop the Lone Star Cafe in New York City during the 70s and 80s. (aka The Unofficial Texas Embassy)

Before its New Your City days, the Iguana lived near Niagara Falls. The lizard was created for display one summer in the 70s for Art Park, a music and art venue near Niagara Falls. After the summer, Wade had to find a new home for the Iguana. Through friends, he contacted the Lone Star Cafe who purchased the Iguana for their roof.

Some New York neighbors felt the Iguana was an eyesore, an oversized code busting advertisement. A court battle designated the Iguana as art, but nonetheless, the owners of the Lone Star Cafe lowers the sculpture below the roofs parapet, so it wouldn't be seen from the street, thus quelling neighborhood dissent.

In 1983, Mayor Ed Koch led an effort to have the Iguana redisplayed (after tiring of wrongly directed complaints that he banned the lizard)  The rededication of the Iguana was attended by Ed Koch and Texas Governor Mark White, (who just happened to be in New York City on state business that week).

When the Lone Star Cafe closed in 1989, the iguana went though series of hands, including an east coast horse ranch and a pier in Tribeca. It was finally purchased by patrons in Fort Worth, where it sat in a barn for 11 years. Eventually it found a home atop the Fort Worth Zoo, where it was delivered by helicopter.  (check out the trailer for an upcoming documentary on the Iguana)

The notoriety of the giant Iguana begat the World's Largest Cowboy Boots, perhaps San Antonio's most iconic site, following the Alamo and the Riverwalk. 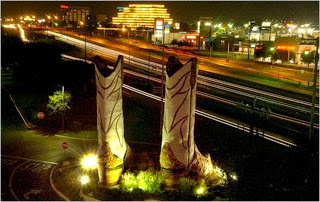 The boots were created in 1979 for the Washington Project for the Arts. The large scale work of public art was constructed and displayed just a few blocks from the White House for over a year on 12th and Avenue G. After the exhibit was over, the Rouse Corporation offered to buy the boots to place outside North Star Mall.

The transportation of the giant boots was an adventure in itself. The boots got stuck in an overpass before leaving the Washington DC. The trucks transporting the oversized footwear had to take back roads all the way to Texas to avoid police, using CB radios to alert the drivers to possible trouble.
In the early days at the mall, KTSA radio became the talk of the town when they built a broadcast booth atop the boot.  For a short time, a homeless man had made a home inside the boot. Today the World’s Largest Pair of Boots has become one of San Antonio’s most recognizable sites.

The Iguana begat the Boots, the Boots begat the Frogs.  The six frogs were originally located in Dallas on lower Greenville Ave atop a club called Tango were Bob Wade's next iconic commission. The club was opened by Shannon Wynne, the son of Angus Wynne, the developer of Six Flags.

The club was originally to be named Six Frogs over Tango. Like the Iguana, Dallas neighbors complained about the frogs. Eventually, the frogs were removed and took a circular tour of Texas. For a while they rested above a gas station south of Dallas called Carl's Corner.

Today, 3 are in Nashville atop a Chuy's restaurant and 3 are back on Greenville Ave atop the Taco Cabana which sits at the same address as Tango.

Bob Daddy-O Wade,  who lives a larger than life existence, passed away on December 23, 2019 at his home in Austin.
On a personal note:  These stories come from an afternoon I spent interviewing Bob when I was finishing my book San Antonio Uncovered.  Of all the interviews I did for the book, that was by far my favorite. He was so generous of his time and his stories were as wonderfully outrageous as his art.  He was a true Texas treasure.