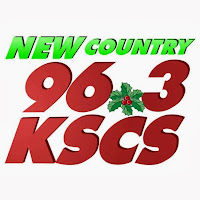 A few years ago, along with Southwest Airlines, we at 96.3 KSCS started something called "Bring a Lone Star Home."  Each Christmas season, we ask families to tell us about a loved one that can't make it home for the holidays, usually due to lack of finances.

I love calling the families and surprising them, telling them we are going to bring home their son, daughter, parent, soldier or long lost relative. It is by far the best thing we do each year.

Today, I received this lovely letter passed, on by Mariah, whose father had a tough year but is coming home for Christmas.  I wanted to share it with you.


I wanted to share a letter from my paw! Thank you, Hawkeye and Terry!

"GOD is so good. All of us have had the joy of his grace at one time or another.
Today I experienced his grace and blessings again.
When I moved to Ft. Worth years ago , I found a country station that was just awesome.

The station was KSCS RADIO FM in Dallas. My favorite show was the Terry Dorsey show which featured Terry and his sidekick "Hawkeye". Together they were the funniest guys I had ever heard on radio. They played off one another so well!
Several years after my experience with prostate cancer, they announced that Terry was going to be away for a time-he had been diagnosed with prostate cancer. I sent an email to him to offer some encouragement and shared some of my experience with him. He responded back and after his treatment, he returned to our delight!
Any time we've been back, I start looking for reception a hundred miles out.
This morning I was getting ready to leave for my radiation treatment when my phone rang. No name was listed...just an area code 214 number. I didn't recognize the number and was hesitant to answer the phone. Naturally , curiosity got the best of me and I said "hello".
The voice on the other end said "Jon" and I said "yes!" The voice then Identified himself as "Hawkeye" with KSCS Radio. It didn't sound like the guy I remembered and began wondering if this was a prank call. He said he and Terry were calling on behalf of someone named "Mariah" and did I know her. I said she was my daughter. Then Terry ( whose voice I recognized immediately) said that Mariah was on the phone with them and they wanted to wish me a "Merry Christmas". My head was just spinning wondering what was going on!

Hawkeye said that he understood that I had been going through some difficult times and they just wanted to help out at Christmas. At this point I'm wondering where this whole thing was going! Then he told Mariah to say hello which she did and we just said "I love you!" By this time, my emotions were rolling along at warp speed....my eyes were full with tears....not "sad"' tear drops but "I miss you" drops ! Terry spoke up and said that each year at Christmas they try and help someone come home who possibly might not be able to do it. They had a contest on that topic and Mariah had WON!!! Then Hawkeye said they were so impressed with Mariah's letter as to why her dad should come home that "Jon we are going to fly you home to Ft Worth for Christmas.!! I was just sputtering at all this! Believe me, it took everything I had to keep from bawling like a baby!!! Finally they just said that they hoped this would be a Christmas we would remember forever. No problem there son!!
So, I just wanted to share this blessing with you. Thank you Sis for thinking of me and making the trip home to Ft Worth possible...and now I'm thinkin, there really must be a Santa Clause too!!"