Behind This Wall - The Hidden Section of Fort Worth's Water Garden


In 2001, The Highway Department removed the outdated portion of Interstate 30 over Lancaster Avenue, rebuilding it on the south side of the old T&P Terminal.


With the removal of the freeway and the acquisition of 4 additional acres of right of way,  the city pounced on an opportunity to revitalize Lancaster into a grand avenue. Sidewalks were widened and landscaped. A series of dramatic sculptures adorned the median. Condos and apartments popped up and future developments are actively being pursued.

Even though the city worked passionately to remove any sign of the interstate, one relic remained. A wall on the north side of Lancaster between Main and Houston Streets. At one time the wall butted up against the street, keeping what was on the other side separate from the traffic outside.

I decided to climb the small ledge and peek over the wall. Behind it laid one of the few, if only, green spaces in downtown Fort Worth, an overlooked area of the Water Gardens called The Stage. I asked a bicycle cop patrolling the area if many people used this lawn. He replied that a few people come here at lunch, but he couldn't remember any organized activity ever using the lawn or the stage. 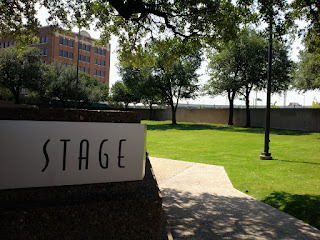 At one time, walling off this area made sense. Lancaster Avenue was a pedestrians nightmare, noisy, dark and filled with the fumes trapped by the overhead freeway. The Water Gardens were designed to be the antithesis to the noise and exhaust.
But the southern end of downtown has changed immensely sense the Gardens were designed. Not only has the freeway been moved, but apartments, hotels, condos, landscaped sidewalks and a law school are now neighbors with the park. It might be time to examine tearing down the wall on the Lancaster and altering the area.


1:  The park has entrances on every side but the Lancaster Avenue side. With the freeway gone and the addition of new development, it make sense to open up the remaining side.

2: There is a lack of green space in downtown. One can argue that this space already exists and this wouldn't add any additional space. But this beautiful area is hidden. Even if you're in the Water Gardens, you could easily over look it,  being that it is on the other side of a large feature called The Mountain.
Removing the wall would not only create an inviting public space, it would also create more access to the park.
CONS:


1. The Water Gardens were designed by noted architect Phillip Johnson and it would be wrong to alter his original design. An interesting argument but not a valid one. The Water Gardens have already been altered for safety issues. And it had a major alteration when the Convention Center was expanded on the west side, creating a new entrance into the Gardens.

2: Altering the Water Gardens would create added cost to an already stretched city budget. True, the city budget is a bit tight, but the park was created with funds from the Amon Carter Foundation. Plus downtown as TIF funds that can be used for the project. There are ways to acquire funding.

It's a simple project that could yield beautiful results.