I recently read an article in the Dallas Morning News about the Sanger Trophy. The trophy was awarded each year to the Dallas Public High School with the best overall athletic record from 1929 to 1954. Forgotten for years, the trophy was found in the basement of Sunset High School and is now displayed at the Old Red Courthouse Museum in downtown Dallas.

I found it interesting that in 1954, there were only six high schools in Dallas that competed for the trophy,  (Six white high schools) and five of them are still in operation.

North Dallas High opened in 1922, sits in the middle of uptown, just a few blocks from Lemmon Avenue. When it was built, this was the far north end of Dallas.
Woodrow Wilson High aka Woodrow, opened in 1928, is located in East Dallas, just south of Lakewood.
Adamson High School, originally Oak Cliff High School, was built in 1915. It is being replaced by the new Adamson High School being built across the street from its current location.
Sunset High School opened in 1925, it is just 19 blocks from Adamson in Oak Cliff. It was built on the western most section of Dallas and given the sports nickname Buffaloes because students had to cross open fields to get to the campus.
Crozier Tech opened in 1907 under the name Dallas High, it had many name changes over the years and was closed in 1995. It currently sits off the Dart line in downtown and is scheduled to be redeveloped.


One high school that was eligible for the Sanger Trophy has a bit more complicated history.  A search of  Forest Avenue High School finds no current history. But then, search for Forest Avenue and you will also come up empty.

Forest Avenue High School was an all white high school located near Fair Park. When it was opened in 1916, it was the most modern and up to date high school in the city. The school served neighborhoods south of downtown including the prominent and predomenently Jewish  Park Row mansions. Famous alumni include Stanley Marcus of Nieman Marcus fame and Television Producer Aaron Spelling.
As the area become home to more African Americans and neighborhoods in North Dallas were opening up for Jewish families, the enrollment of the all white high school dwindled. In 1956, the Dallas Board of Education announced that Forest Avenue High School would be converted to a 'Negro' school to relieve overcrowding at Booker T. Washington and Lincoln High, and the white students would be moved to Crozier Tech downtown.

A few days later, PTA and the Dad's Club asked that the schools colors, name and mascot be retired but remain available to any white school that chose to use them. The school reopened the next year with a new name, James Madison High School. It still exists today, but Forest Avenue has long since been renamed Martin Luther King Blvd. If you enter Fair Park from the east off of the MLK exit, you will pass by the old Forest Park High School.

I wondered what happened to the school's collection of trophies and memrobilia. It obvioulsy wasn't displayed at James Madison High, even though the school was officially desegragated in 1965.
I found the collection of Forest Avenue High's trophies stored at the Dallas Library, in the Texas /Dallas History collection. I recently took an afternoon to go thru these items. The photos below are some of the pieces I found. 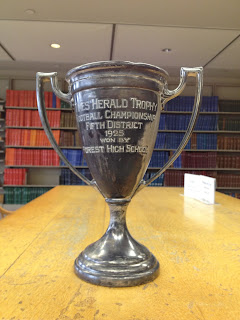 Find out more about the Forest Avenue High School Collection