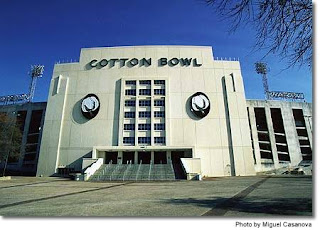 I would like to take this opportunity to publicly apologize to the city of Dallas. I mocked you, when you spent $50 million to update the Cotton Bowl. Joining the masses, I derided you for putting curtains on a sinking battleship. I laughed at what I perceived as a tremendous waste of money.
But hindsight is 20/20. And I was wrong. $50 million dollars was an incredible investment.
Consider that the Texas - OU game this past weekend brought an estimated $30 million impact on the Dallas economy. When you multiply that by eight, (Starting in 2008, the two schools have agreed to continue to their State Fair tradition until the year 2015) that means your $50 million dollar investment brings over $240 million to the city. Not to mention the economic impact from the future Texas Tech - Baylor Game, the new January first bowl game and the Grambling - Prairie View game.
Of course, the Texas-OU game is the 800 pound gorilla. Move this game, and the Cotton Bowl would never recover. Both Texas and Oklahoma have a love affair with Fair Park, a love affair that has a lot more to do with money than tradition. A recent article in the Dallas Morning News pointed out that both schools make more money from this one game at the Cotton Bowl, than they would if they were to have the game alternate between their home stadiums. The 90,000 plus seats (with out having to sell any low price tickets to students) makes for one big fat $10 million paycheck every year.
When the city decided to spend $50 million on the Cotton Bowl, its only other options were let it continue to deteriorate and lose the Texas-OU game, or tear it down. If you took the stadium out of the middle of Fair Park, can you honestly think of anything that you could build that would generate over $240 million in economic impact. Basically, the city of Dallas got a very serviceable 90,000 seat stadium for $50 million. That's pretty cheap, especially when you consider that Jerry Jones spent 20 times that on his stadium.
Speaking of Jerry Jones, he is salivating at the possibility of stealing this game away from the city of Dallas. But asks most Texas-OU fans, and they are firmly against moving the contest to Arlington. Taking this game away from the friendly confines of the State Fair would be like traveling to Chicago to watch the Cubs play in a mall parking lot. Jerry World may have the world's biggest TV screen, but it also is surrounded by acres of $75 asphalt parking spots. Not much of an atmosphere, unless of course, you are lucky enough to be in a luxury box surrounded by Roger Staubach, Cher and a Jonas Brother.
Somehow, the aging Cotton Bowl and it's South Dallas surroundings transform itself once a year into an iconic revenue producing venue that blows Jerry's state of the art palace out of the water.
In 1971, the city of Irving spent $35 million on a state of the art venue called Texas Stadium. I drove by that yesterday for one final look before they tear it down. If I told Tex Schramm that his iconic hole in the roof wouldn't outlast the Cotton Bowl, I'm sure he would have laughed. Look who is laughing now.
Read the Dallas Morning News article on the economic impact of the Texas - OU game.
http://www.dallasnews.com/sharedcontent/dws/spt/stories/101709dnsporedriver.221e179cd.html
at October 21, 2009